The policy debate on combatting poverty in Ireland is often confined by economists to a narrow framework based on one insufficient measurement of poverty, while others are ignored.

Widely cited research from the ESRI found that increasing the minimum wage would not be very effective in combatting ‘poverty’, an issue which, in a high inflation environment is more important now than it has been since before the great financial crisis. These findings are regularly referred to as evidence for policymakers to favour income supplements for low wage workers over minimum wage increases.

The focus of analysis is on one indicator, the dominant indicator of poverty in Irish discourse, the ‘at-risk-of-poverty’ (AROP) measure.

According to Eurostat (the official statistical agency of the European Union) this is not a measure of poverty at all: “This indicator does not measure wealth or poverty, but low income in comparison to other residents in that country, which does not necessarily imply a low standard of living.”

AROP is a distributional indicator (of monetary poverty) with no relation to living costs. As such, every person in Ireland could take a cut of 50% in their income tomorrow (all else equal) and the share of the population in the at-risk category would not change. This is particularly important to consider in an inflationary environment.

The unit of analysis when it comes to this indicator is the household rather than the individual worker, so it actually includes many groups not in the labour market such as children, retirees and the inactive and bundles the earnings of everyone in the household (including growing numbers of low wage workers stuck living at home).

The threshold of this indicator is defined as 60% of the median equivalised household income. For a single adult, the threshold is approximately €16,000 a year.

This figure has no practical application and is not really even recognised as useful in actual government policy when it comes to supports. For instance, a single adult can get housing assistance payments or HAP (and apply for social housing) with net income of over twice that (up to €35,000). Yet still, when much of this is discussed, we’re talking about households on either side of this much lower income threshold.

Most minimum wage workers are in the top half of the population by household income, so the results showed that an increase would not impact the share (around 12%) of the population who are AROP (at least not by much). This is in large part due to the fact that most people in households at the bottom of the income distribution are retired or are unemployed with little market income and therefore any minimum wage policies don’t apply to them (children are counted too and are more likely to be in AROP households). The at-risk-of-poverty rate is 45.5% for a single adult over 65 for instance – it’s 95.5% before social transfers, four times the average – but the material deprivation rate (those who can’t afford the basics) is 8.9% (50% lower than average).

Nevertheless, other analysis from the ESRI shows that of households with at least one employee over 6 in 10 low wage workers are in the bottom 40 percent of those households by income. This part is mostly lost in translation.

The poverty threshold is €15,993 a year net/disposable income or €1,332 a month for a single adult (2021). This means that a single adult minimum wage worker working 30 hours a week would be earning just over that threshold and not ‘at-risk-of-poverty’.

A broader understanding of poverty

Our understanding of and policy in relation to poverty should not be confined to this one indicator.

The AROP threshold for a single adult is €563 a month (or 42%) lower than the cost of a minimum essential standard of living as calculated by the Vincentian partnership for the Living Wage (the gap will be much wider in 2022 with inflation).

The AROP rate was estimated at 11.6% with the population in material deprivation (cannot afford the basics) at 13.8% by the CSO in 2021. However, for the most part, these measures counted two completely different groups of people; over 7 in 10 people in material deprivation are not below the ‘at-risk-of-poverty’ income threshold.

Eurostat have Irish material deprivation at 9.7 % of the population (they have slightly different definitions to the CSO) and 17.7% in Hungary yet the two countries have near identical (Hungary slightly lower actually) shares of the population ‘at-risk-of-poverty’ (12.9 % in Ireland, vs 12.7 %). This works in the opposite direction too. Denmark are also almost identical in the share of the ‘at-risk-of-poverty’ population (12.3%), yet Ireland has an additional two-thirds per head of population unable to afford the basics (9.7% v 5.9%).

Because this indicator is based on household income it obscures the living conditions of young low wage workers forced to live at home with their parents by the cost of living (their income is counted with their parent’s income as household income so they are much more likely to be located in the top half of the income distribution and not ‘in poverty’ merely as a function of more people being at work in the household).

We now have the fifth highest share of adult children aged 18-34 living with their parents (behind Croatia, Greece, Italy and Spain) at 62.4%. It’s the highest in 19 years (since they started counting). Bear in mind also that the population of this group (20-34) fell by about 25% (1,151,000 to 918,000) between 2008 and 2019, and yet there are fewer affordable options for working young people to live independently in this country. Despite some of  the highest levels of third level graduates in the world, under 30’s in Ireland are 5th most likely out of 36 European countries surveyed in 2018 to be low wage employees (34%).

Women make up the biggest share of minimum wage and low wage workers too. A common argument now, based on the findings in the ESRI analysis is that that MW workers don’t need a living wage, as income is shared in households and there’s usually someone else, or multiple others in the household they can depend on.

The policy conclusion of this analysis is then that social transfers/income supplements such as the Working Family Payment and the Housing Assistance Payment are better than wage increases. Basically, this is an argument to subsidise low wage employers even more and in fact, to bake in a government subsidised low wage economy long term, which will be extremely difficult to escape from. It’s fundamentally anti-worker.

As the Department of Employment Affairs and Social Protection warned in 2018:

“It is crucially important however to consider the broader policy context when examining the effectiveness of DEASP supports. Issues such as low pay and precarious employment are likely to become ever more important in the years to come. It is worth noting, for example, that a large proportion of recent job growth has been concentrated in the Accommodation and Food Sector – an industry where the high incidence of low pay is widely acknowledged. The rapid and sustained increase in the numbers of families in receipt of the Working Family Payment over the past ten years, coupled with the dangers associated with any growth in the incidence of precarious employment make it all the more important to ensure that the income support system does not inadvertently contribute to a rise in the numbers engaged in low-paid, insecure employment.”

We have one of the highest rates of low wage workers in Europe and we subsidise the low wage economy and low wage employers more and more every year. The share of HAP recipients in work gets bigger every year, as does the median earned income of people relying on these payments to pay rent as growth in living costs continue to outstrip wage growth. It will get worse next year.

A low-wage economy is not something we should be going out of our way to embed long-term in our society. We should be doing the opposite and working towards a wage floor based on adequacy.

Ciarán Nugent is a PhD candidate with the Department of Sociology in Maynooth and part-time Lecturer in Political Economy in the department of Applied Social sciences in Maynooth. An economist by trade, he also sits on the Living Wage Technical Group and the Board of Directors for GEMS NI. 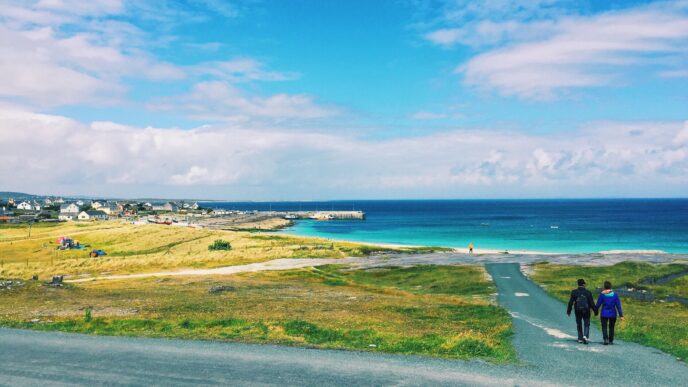